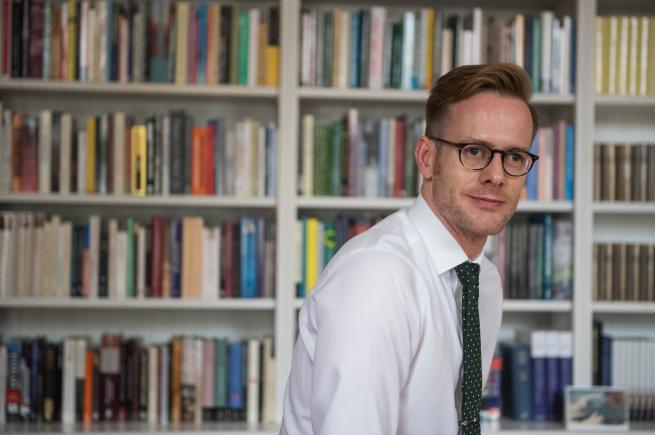 Andrew Counter joined New College and the Sub-Faculty of French in 2015, after positions at King's College London (2012-15) and Gonville and Caius College, Cambridge (2009-12), and a Research Fellowship at St John's College, Cambridge (2008-09). He read French at Christ's College, Cambridge, where he went on to complete his PhD in French. Dr Counter is currently a member of the Executive Committee of the Modern Humanities Research Association, and edits their New Translations and European Translations series. In 2018, he joined the Advisory Board of the US journal Nineteenth-Century French Studies.

Dr Counter's research considers the intersections of law, politics, sexuality and literature in France between the Revolution and the Great War. His work draws on a broad range of methodologies and considers multiple genres, including literary, legal, medical and political discourse, though he has a particular interest in the novel. His first book, Inheritance in Nineteenth-Century French Culture (Oxford: Legenda, 2010), was an interdisciplinary study of the use made by writers of fiction and non-fiction alike of the narratives, vocabulary and ideology of inheritance and property transmission. His second book, The Amorous Restoration: Love, Sex and Politics in Early Nineteenth-Century France (Oxford: Oxford University Press, 2016), explores the Bourbon Restoration (1814-30) as a period when discourses of love and sexuality provided an important vehicle for political discussion, and especially for the working through of post-revolutionary political resentments. This book co-won the Modern Language Association's Also and Jeanne Scaglione Prize for French and Francophone Studies in 2017.

Dr Counter has been awarded numerous research grants and prizes. He is currently Co-Investigator (with Dr Nick White, University of Cambridge) on an AHRC-funded Research Network entitled ‘The Art of Friendship in France, 1789-1914’, which brings together scholars in French and French History from Britain, France, Canada and the United States. In Autumn 2014, he won a Bourse de chercheur invité at the Université d’Orléans, and in 2013, he was the recipient of a Philip Leverhulme Prize, awarded to ‘outstanding scholars who have made a substantial and recognised contribution to their field’. In 2011, Dr Counter won the Malcolm Bowie Prize for the best article by an early career researcher in French Studies; in 2013, he won the Forum for Modern Language Studies ‘Forum’ Prize; and in 2015, the French History article prize.

He is eager to hear from prospective graduate students wishing to pursue research on any aspects of nineteenth-century French literature (though especially prose fiction) and cultural history.