400th Anniversary of the Savilian Chairs

2019 was the 400th anniversary of the founding of the Savilian Chairs of Geometry and Astronomy at the University of Oxford.

Sir Henry Savile, Warden of Merton College, was himself a renowned scholar and teacher in mathematics and astronomy. He founded the two positions in 1619 to encourage teaching and development of what were then two somewhat neglected subjects, "almost totally unknown and abandoned in England."

Both of the Chairs now sit at New College, Oxford.

The anniversary is being marked on Saturday 23rd November with a series of events at the Bodleian Library and New College.

A series of lectures looking at the Savilian Professors of Geometry took place on Saturday 23rd November, organised by the Bodleian Library and the British Society for the History of Mathematics.

Professor the Honourable Robin Wilson as former Savilian Professor Henry Briggs in his talk at the conference.

"The Savilian Chairs of Geometry have always played an important role in the mathematical life of Oxford. I feel delighted and honoured to be part of this tradition."

Steven Balbus, Savilian Professor of Astronomy and Head of Astrophysics, gave a lecture earlier this year in honour of the Chair, which you can see below.

Seeing the Unseen: How do Astronomers Perceive the Universe in the 21st Century? from New College Oxford on Vimeo.

We have published a book!

Geometry and Astronomy in New College, Oxford is now published, marking the quatercentenary of the Savilian Professorships, 1619-2019, at the University of Oxford.

Edited by Library Fellow William Poole and Librarian Christopher Skelton-Foord, and designed by Colin Dunn, the book tells the dual history of astronomy and geometry from the late 14th century to the present day in New College, Oxford, and also of the professors over the past 400 years who have led research and teaching in these mathematical disciplines within both the University and the College.

Find out more about the book and order your copy here. 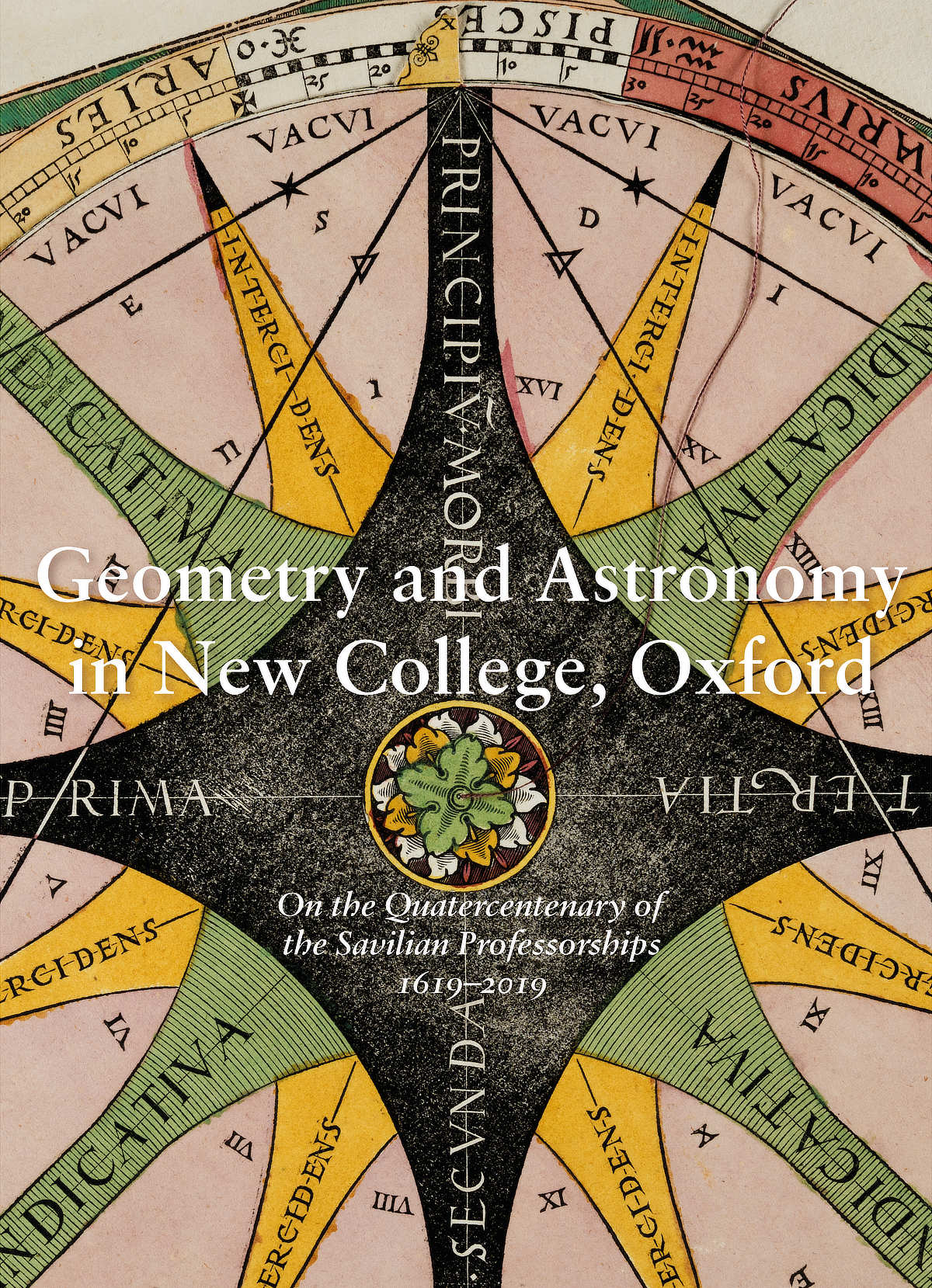 The cover of 'Geometry and Astronomy in New College, Oxford'

New College unveiled a commemorative plaque on New College Lane on 23rd November. It was unveiled by current Savilian Professors Frances Kirwan (of Geometry) and Stephen Balbus (of Astronomy).

The plaque is on New College Lane, just outside the observatory from which Edmond Halley did much of his work as Savilian Professor of Geometry. 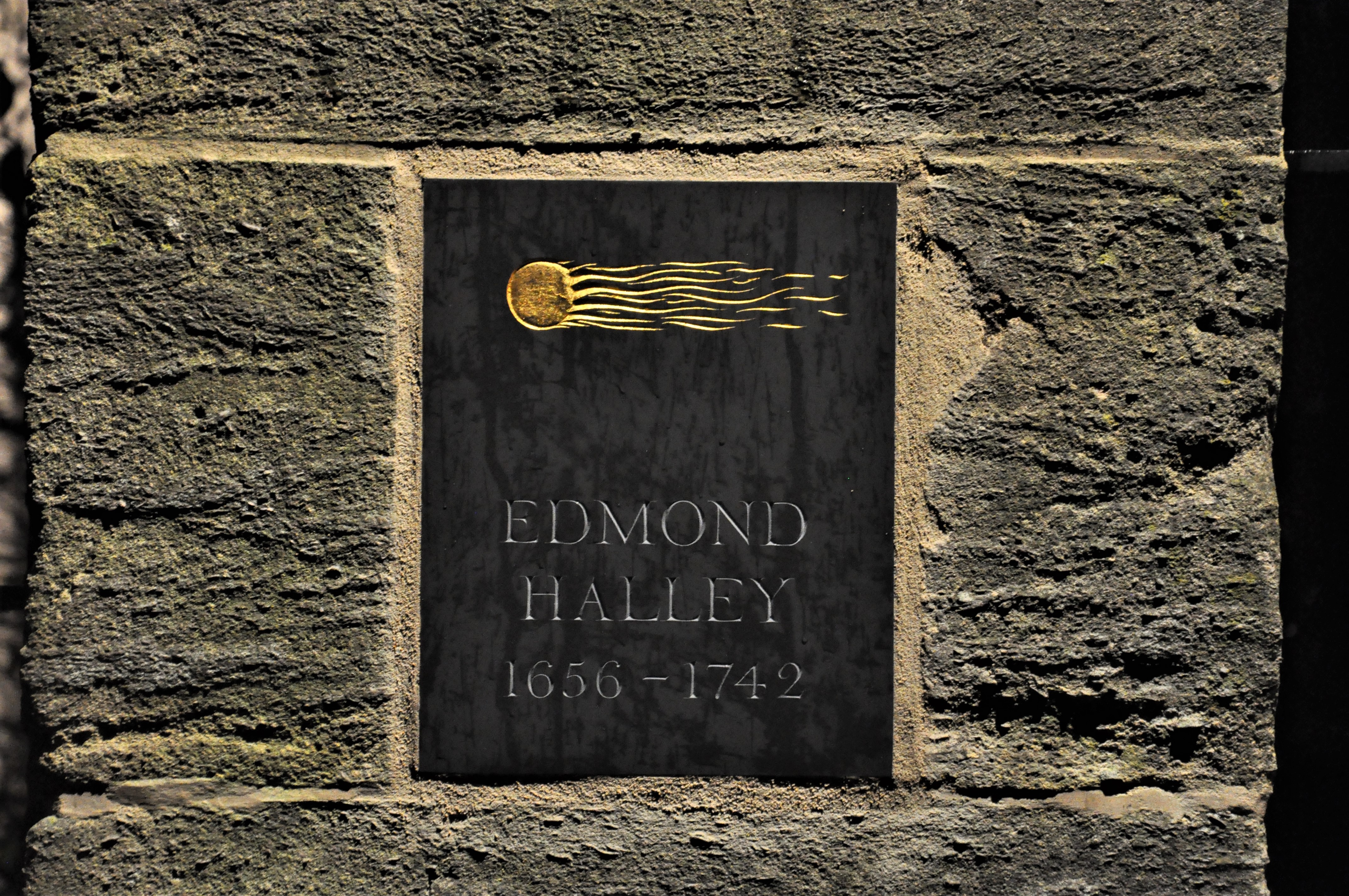 The plaque, outside the house and observatory on New College Lane.

In celebration of the two chairs, New College has also acquired a new telescope and commissioned a gomboc, both pictured below.

This Celestron Advanced VX-925 is a Schmidt-Cassegrain telescope, meaning it combines the benefits of a reflecting mirror with the compactness, portability, and low-maintenance of a refracting lens. The diameter of the aperture is 9.25"; being the widest apperture compatible with our portability requirements, this allows the maximum possible collection of light. The telescope has an advanced VX 'goto' mount, allowing it to automatically locate and track stars across the sky.

We were advised on various aspects of the purchase by Katherine Blundell OBE, Professor of Astrophysics at Oxford and Professor of Astronomy at Gresham College. The telescope was purchased from Harrison Telescopes with funds provided by the Emmerson bequest. 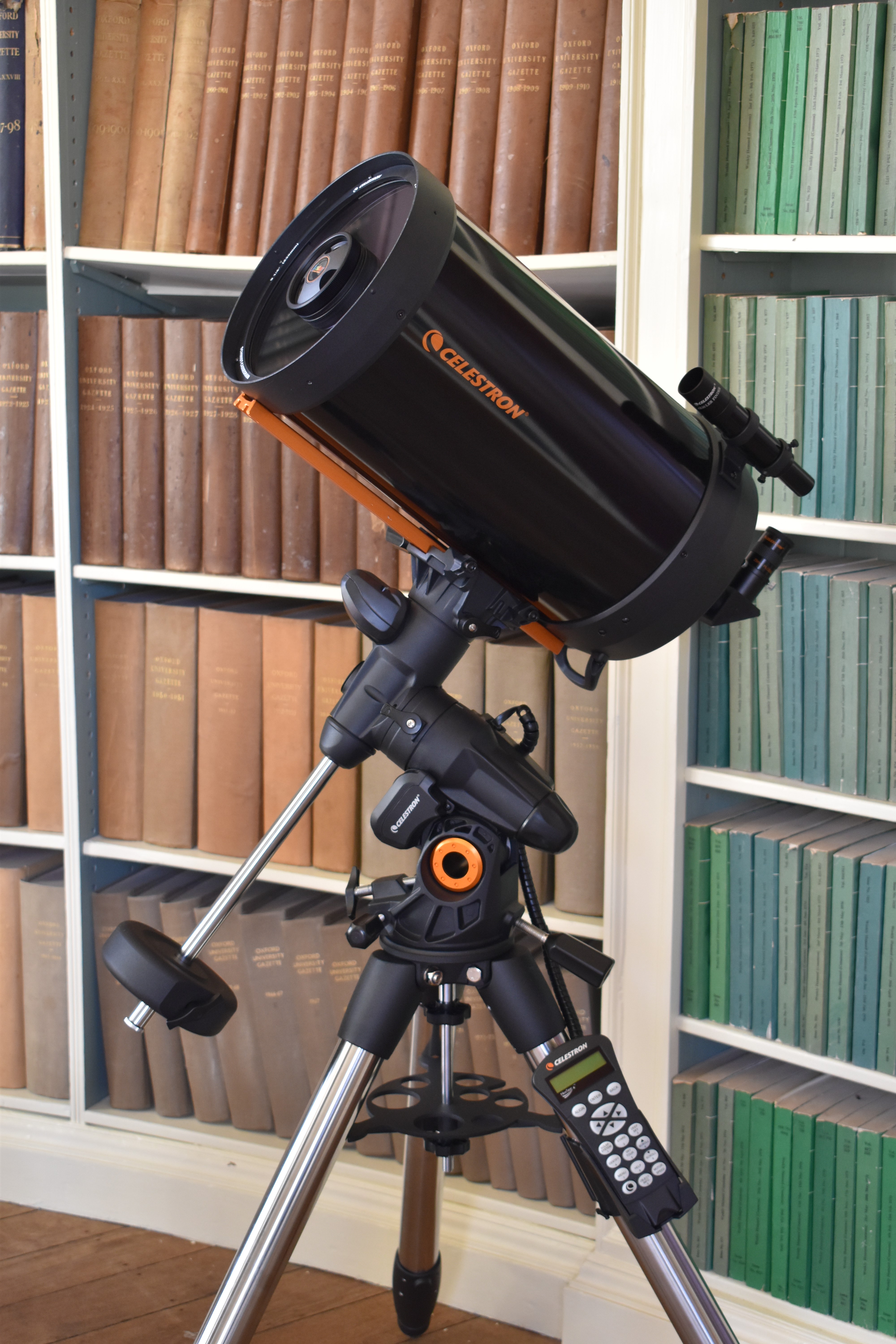 The Gömböc is a paradox, a work of art, and the answer to a deep mathematical question. Imagine a pebble living in a two-dimensional world, such as a profile drawn on paper. The pebble can be of arbitrary shape provided no point on the surface dents inward. It is easy to convince yourself, and straightforward to prove, that if the pebble is homogeneous it must have at least two stable, and two unstable, points of balance. It cannot have one. In 1995, it was conjectured that there may exist a three-dimensional shape which does balance on precisely one point. After a decade of work, two Hungarian mathematicians, Professors Gábor Domokos and Péter Váronyi, found the shape. They named it a Gömböc (pronounced ‘gømbøt͡s, roughly gumbuts), a diminutive of gömb, sphere.

Numbered individual Gömböcs may be commissioned as one-off works of art. Consisting of 99.99% pure silver, G1619 was commissioned by New College SCR to mark the 400th anniversary of the founding of the Savilian Chair of Geometry, recently taken up by Professor Dame Frances Kirwan. The commission, overseen by Professor Domokos himself, has been made possible by a number of generous donors: Mr Ottó Albrecht of Hungary, and funds once again from New College’s Emmerson bequest. The creation of a silver Gömböc presents a significant challenge, and will take several years to complete. To coincide with the quatercentenary itself, Mr Albrecht commissioned G400 in bronze, engraved with the inscription ‘IN MEMORIAM SIR HENRY SAVILE’. 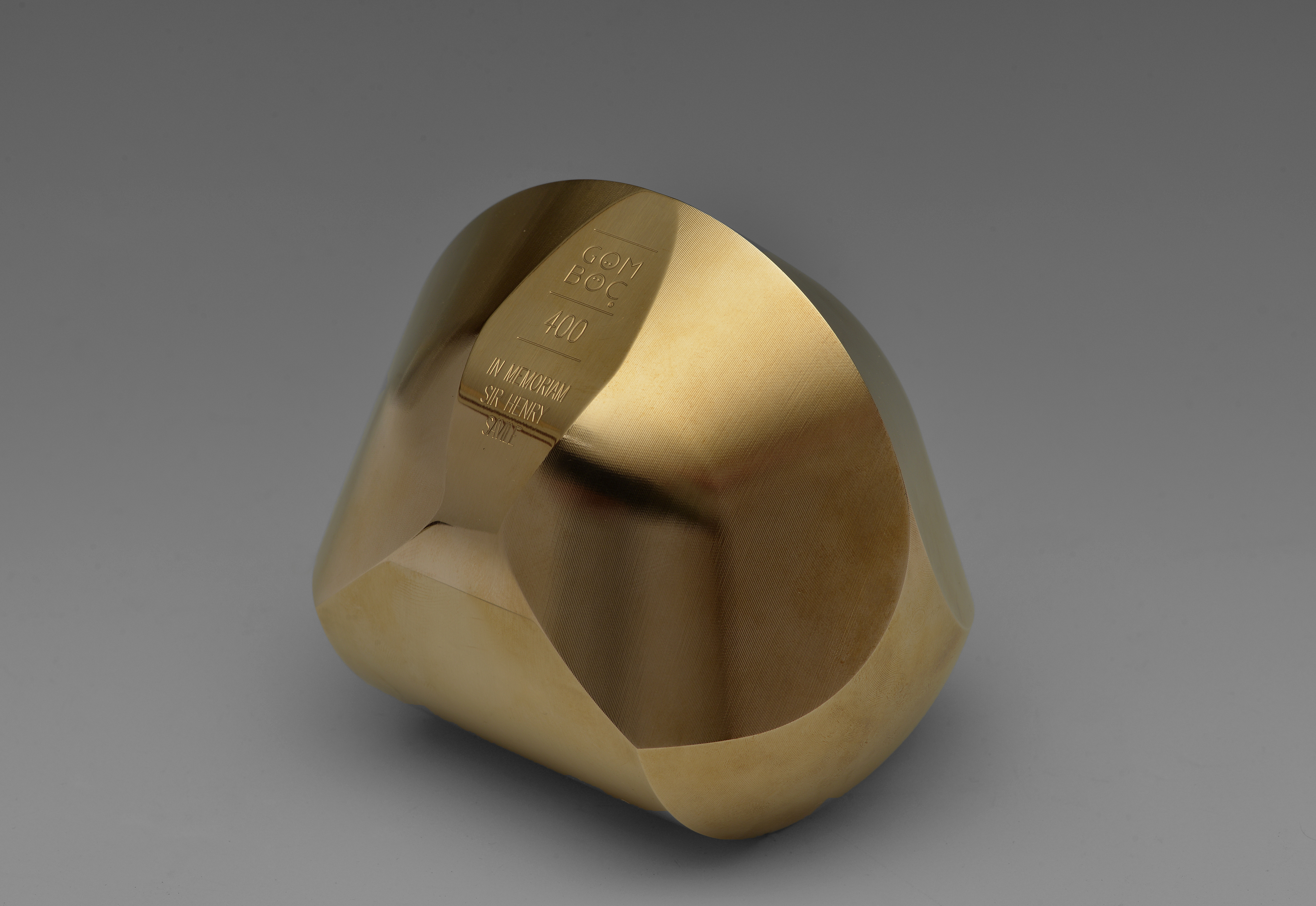 The New College Library team created a special exhibition on Geometry and Astronomy in the Upper Reading Room, in honour of the anniversary. 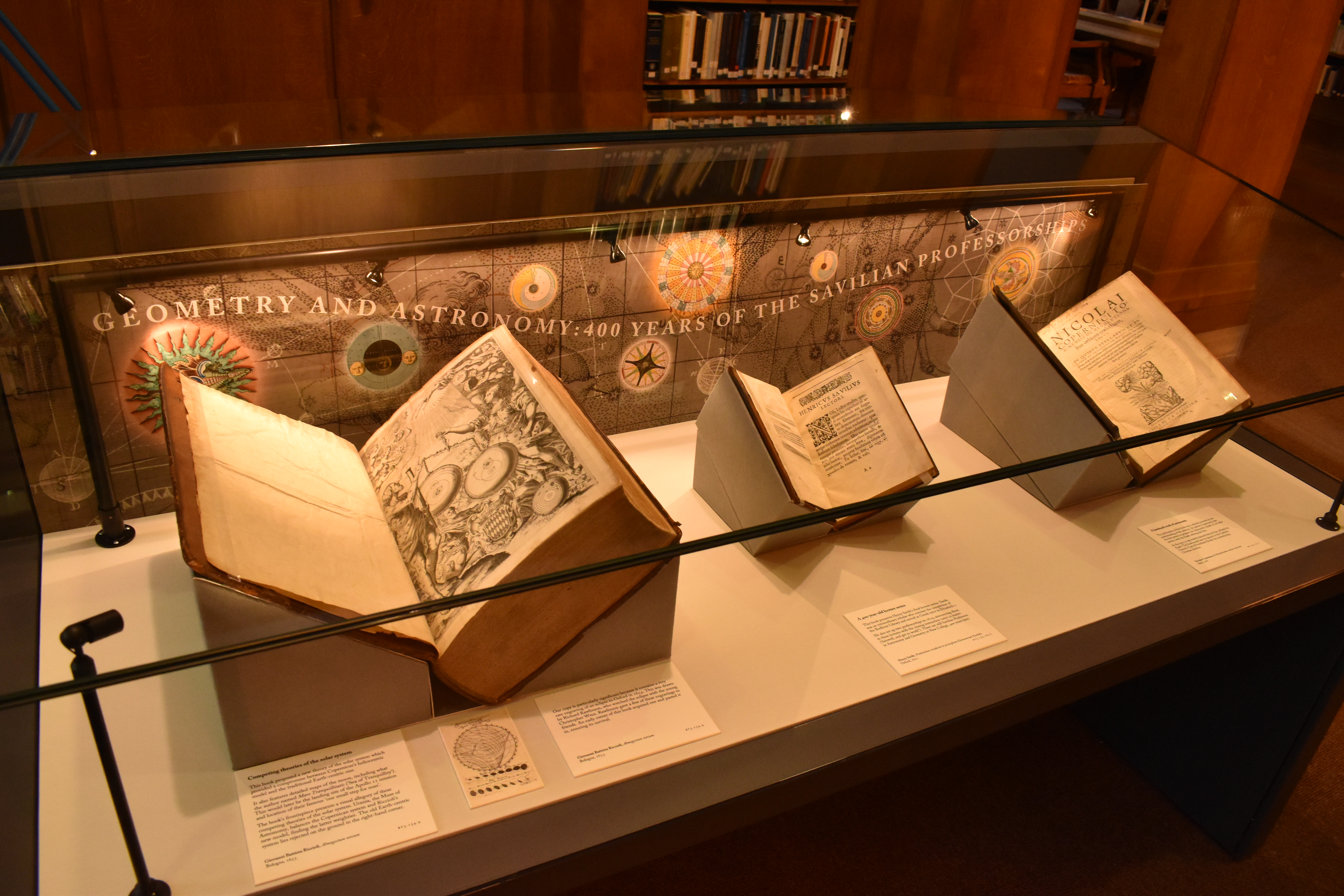 You can take a look at the Library's Savilian exhibition in detail here.

Below is a video of Astronomicum Cæsareum in action. This spectacular sixteenth-century book contains volvelles, an ingenious technical feat.  These devices consist of moveable circles which serve to ascertain the rising and setting of the sun and moon, and the movements of the constellations, and to forecast eclipses and comets.  They originally had seed pearls threaded onto them to aid the reader, but these were so miniscule that most copies have lost theirs.  Unusually, the New College Library copy still has almost all of its pearls.