If my life had panned out differently, it would be biologically possible for me now to have a granddaughter as an undergraduate. I must therefore recognise, 40 years on, that 1979 is more history than current affairs: so we must choose to decide whether the (Napoleonic) agreed fables of the first women of New College are told only by the (Churchillian) victors. I find my 2004 comments alarmingly prophetic: life has become much harder for young people today and we live in an uncertain world. To that end I hope that New College feels today not so much a privileged bastion as a safe haven for its members, and a daily reminder that it is possible, at least, to endure and at best, to thrive.

This article was first presented at the celebration of ten years of women at New College when I was 29. Now, no longer young, free or single, but considerably more content, I have my first pair of varifocal spectacles; and I discover that parts of my recollection have become more varifocal. Most importantly, despite the remark about loneliness, i discover that I still have good friends who date from my time at New College. Secondly, my association, thanks to New College, with our sister institution of Winchester College as their first female Fellow (=School Governor and Trustee) makes me realise that New College managed to change its culture relatively quickly and - in retrospect at least - painlessly, given the burden as well as the privilege of history. Finally, we now live in a new century. The relative peace and prosperity of the late twentieth century may begin to look like a golden age for all who live through it, and for those of us who sat on beautiful lawns with the sun shining off ancient yellow stones as we drank too much and worked too little while living off our government grant, we should have the humility to recognise our very great good fortune.

I was asked to speak on what it was like to be in the first intake of women in 1979, and what having been a woman at New College meant to me today. I feel rather like an undergraduate making excuses at a tutorial: 'Yes, I did write an essay, really, but it wasn't any good so I threw it away.' In fact I wrote a version of what I meant to say and found it full of an anger of which I had been unaware, and which clearly has been bottled up over the years since I graduated. I don't know how much of it is fairly directed at the College; and I threw that version away, because of course my time here was far from being all bad.

However, an illustration might make my point appropriately. On my second day at New College the then Chaplain, Christopher Dent, held a sherry party in the Red Room. By way of making conversation, I asked him what the dons had made of the admission of women. He answered in characteristic style, as any of you who knew him will recognise: "Not many of them resigned".

This was something of a cold blast of realism to my naive expectations of equality. I can honestly say that such antipathy - an antipathy to bright women at an Oxford College - had never occurred to me. More fool me, of course; history should have informed me, if nothing else, and it was still early days in the concept of equal opportunity. Five months before I cam up, the UK had elected its first woman Prime Minister. Four years earlier, it was perfectly legal to pay someone less money for equal work, or refuse them employment, simply because they were female. So the fact that resignation was a possibility over the admission of women in the six hundred and first year of a previously male college was perhaps not so shocking. But prejudice is always upsettingly incomprehensible to the object of that prejudice, and it said something about the institution of which I was by then a very junior member which I had not wanted to know.

That said, I should add that at no time was I aware of any explicit hostility (though I am more aware now than then of the way that courtesy can be used as a defensive weapon). And, to be fair, I think that, in the way they had prepared the College for the arrival of women, the Governing Body, severally and together, certainly meant well.

Manifestations of this? The domestic arrangements were the biggest giveaway. Women were strange and different; we therefore had segregated staircases, tarted-up bathrooms and, because we were weak, vain creatures, full-length mirrors on every floor.

These were the Achilles heel of this paternalistic system. Vanity has never been an exclusively female prerogative at New College and those full-length mirrors - much more than the women behind the doors - were an irresistible magnet. I have never seen more tie-straightening, collar-turning, stubble-rubbing, back-straightening and hair-ruffling than went on in front of the mirrors on staircase 7. The barricades were down.

The appropriateness of these essentially 'feminine' trappings was further exacerbated by the nature of the intake in '79. There were twenty-five women in a year of about 100, and a college of 300. We had been selected by tutors who, with the probably exception of the science dons, had little experience of teaching and none of choosing women. Anyone who had suggested in '79 - or, I suspect, today - that Oxford dons should be trained in interview or teaching technique would I expect be burnt as a witch; but perhaps it is fair to assume that the experience was at best a strange, at worst an unsettling, on on either side. A senior fellow - of another college, I hasten to add - confided in a colleague that he 'could not be trusted alone in a room with a woman', so all his interviews had to be conducted in mixed pairs. This is depressing, but true.

So it is hardly surprising, and hardly our fault, if we were an odd bunch. In fact, within the confines of the educational stratum we occupied, I don't think it would have been possible to find a more diverse selection of women. Earl's daughter, diesel-dyke, official midget, engaged to be married, madly promiscuous, public school, comprehensive, even one with an abnormally hairy left knee - some people have since commented that we appeared to have been selected to have as many types as possible, like the animals into the Ark, only singly. With that it is hardly surprising that we didn't conform to the stereotype that the College had of women. In fact, we failed to conform to anything at all, with the unanticipated result that few people made strong women-to-women friendships; within this year female solidarity was not a strong feature. I suspect loneliness was. Fortunately the following year, despite the almost total absence of role models from us, seemed (if they will pardon the expression) a more normal bunch. And perhaps it has settled down now; no need to be one of the lads, no need to be ashamed of femininity or, on the other hand, forced into it.

We were a relatively invisible group, taken as a whole, as well. I surprised myself by coming up with eighteen names from memory the other day; most people, I expect, would be hard pushed to come up with more than four or five. But then it was my business to know people in the year I became Steward (as the President of the JCR was known before the change of title in 1992); if you want people to vote for you it helps to remember their names.

My period as Steward was fairly uneventful as far as outward and visible signs to my fellow JCR Members were concerned. But on the boring old administrative issues, like the percentage increase for accommodation charges, I and my Treasurer, Stephen Matthews, did rather well. I don't know if it was anything to do with my being a woman; I had by then certainly learnt how to play the courtesy card straight back, and maybe the strange newness of negotiating with a woman made the college more generous. That and the fact they had just sold a chunk of Berkshire - which I suspect they thought I didn't know, but which was passed on by some kind SCR moles at the time.

I was Steward for my second, running into third year, and holding that office gave me the thing which perhaps other women of my year didn't have: a sense of belonging to the college and, more importantly, of the college belonging to me. This is, I think, the thing that is of relevance to me today; I do not define myself as a New College Woman (it has a rather nonsensical ring anyway, putting into perspective perhaps the idea of being defined as a New College Man), but New College is something to which women - to which I, and you - belong, and which belong to us, despite its 600 years of male tradition, despite the fact that the 20th century caught up with it very late, and despite it being such a venerable part of the Establishment. I will use the fact that I went to New College as an Establishment credential if I need to; I will talk about the first year of women in an ancient Oxford college if I have to. As I say, it doesn't define my life; it would be wrong if it did, because at least in that first year it was a partial, a difficult and a struggling life which had less to do with being at New College than being female. It is that which strikes me as a better way to define myself - as a woman. I, and the college, have changed in the last ten years, both for the better if there is not seen to be an inherent tension in being a woman and being at New College any more. And I must end by saying that I do actually love the place - I'm proud to have it as part of me, and I am only glad that the mythical beast that I represent - first year of women, first female JCR Steward - can well and truly be consigned to history. 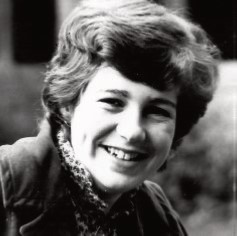 Caroline Kay came to New College in 1979 to read Psychology and Physiology, during which time the above picture was taken. She has for the last 12 years been Chief Executive of Bath Preservation Trust and is a Trustee of the National Trust. Married, with a 20 year old son, she also has 4 adult stepchildren and a 2-year-old step-grandson.