During recent excavations outside the Sacher Building, our gardener Paul discovered a strange object buried deep under the surface. It was a small, very white spindle, made out of pipe clay, and stamped on one end with the initials ‘W B’. 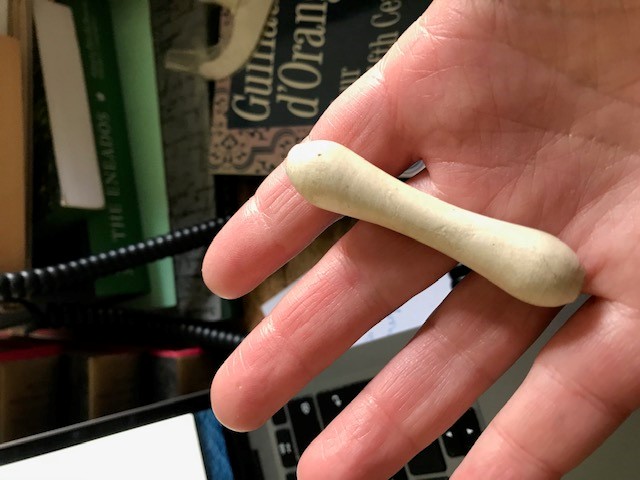 What is it? A bit of poking around on the internet, and it soon became obvious that this is a WIG-CURLER. It probably dates from the earlier eighteenth century. These work like their modern plastic equivalents: at the end of the day, the fashionable wig-wearing gentleman would heat his wig-curlers, coil the locks of his wig around them, and leave them in place overnight.

At that time, Longwall Street was much wider, with houses built along and in some cases against the City Wall. Was this an accidental drop by a well-to-do resident of the time? This seems slightly unlikely, as the area was not particularly affluent. A different scenario has been suggested by Magdalen College - it turns out that they too, in their recent excavations for their new library on the corner of Longwall, found a quantity of these wig-curlers, and the current suggestion is that these came from what was the basement of a barber's shop. Perhaps ours strayed from there?